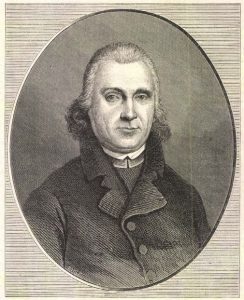 VERSEGHY Ferenc (April 3, 1757 – December 15, 1822) was a renowned writer, poet and linguist of the Enlightenment. He was born in Szolnok, the son of VERSEGHY János, treasury official and SCHAIBL Erzsébet. Between 1763 and 1766 he was educated in his hometown, from 1766 in Pest and from 1769 in Eger. From 1771 on, he attended the clerical Seminary of Eger. In 1777 he interrupted his studies and went to Buda to pursue legal studies. In 1778 he entered the Pauline Order, in 1781 he was ordained a priest. Following his studies in Trnava and Buda, in 1784 he was placed to the Pauline monastery in Pest, where he served as a preacher. After the dissolution of the Pauline Order, from 1786 on, he served as a military chaplain and even attended the campaign of Joseph II. against the Turks. In 1793 he was condemned for his anticlerical theses.

Looking at the whole of 18th century Hungarian literature, it becomes clear, that – just like in the previous centuries – writers and literary people were more translators and adaptors than primary creators. This is characteristic of the work of VERSEGHY Ferenc too: most of his works are translations of poetry, prose or drama texts from German.

He translated the pamphlet of Antoine Guyard (1692-1770), French Benedictine monk, and the fictive epistolary novel of Dusch, a German author. These works were already prepared for edition but were never published, supposedly because of the dissolution of the Pauline Order, the change in Verseghy’s living conditions, or the criticism of his Church superiors and censors.

He wrote and translated poems and plays. He translated, for instance, the plays of one of his contemporaries, August von Kotzebue, which was also staged. He participated in the editing of the journal Magyar Museum (Hungarian Museum), where he published poems and translations of scientific works of poetic subject.

It was in the favorable atmosphere of the fora of the second half of the 1780s when Verseghy became a polymath in the service of Hungarian culture, as a poet, novelist, playwright, composer, historian, publicist and the author of veterinary works.

Verseghy often stressed the importance of caring for Hungarian language. He pointed out that a generally accepted grammatical system should replace the various dialects, which also should be taught at school. His fundamental finding was that the rules of Hungarian language should be learnt by native speakers as well, so that a uniform language use would spread. According to him, this is a prerequisite of the cultivation of sciences and literature to a high standard. In 1793 he published a Hungarian grammar book in Latin and a study on aesthetics and the theory of poetry. He wrote a number of textbooks and series of handbooks. When designing them, the main point was the pedagogical aspect; to organize well the knowledge of phonetics, grammar, syntax and etymology of the Hungarian language.

He was imprisoned for his participation in the Hungarian Jacobin Movement. He was the last one among the convicts to be released in the fall of 1803. After he returned home, he made a living as a preceptor, translator and from other commissions to publishers. In a few years, he was admitted to aristocratic circles and could teach as a preceptor.

He was also a composer, wrote melodies to his own poems and played the harp himself. Among his extant manuscripts, there are a number of poems set to music and scores of songs. He was a literary to write and read in multiple languages, and he published a series of works of many different disciplines: he left behind a colorful and vast oeuvre, some of which only remained as a manuscript or fragment. He was a broad-minded and susceptible scientist, an active formative personality of contemporary intellectual life.

During and after his release, he spent part of his time translating and adapting contemporary English and German novels. He placed the heroes from the original setting, from abroad to Hungary, and also added Hungarian features to the characters, to bring them closer to the readers.

In the last years of his life he had financial difficulties, so he worked mainly on demand; instead of literature, he dealt with science and the creation of a Hungarian scientific language. He participated in the preparation of the first Catholic journal in Hungarian language: Egyházi Értekezések és Tudósítások (Ecclesiastic Treatise and Reports), as well as the new Hungarian translation of the Bible. He wrote religious poetry and translated psalms. 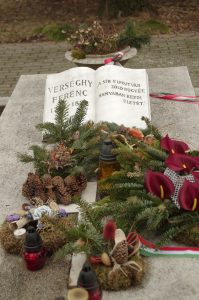 He died at the age of 65, in Buda. The cemetery, where his ashes were buried, was closed down in 1930. The capital city let his hometown, Szolnok, have the ashes. In the fall of 1931 a huge crowd escorted the coffin of Verseghy ceremoniously to the honorary burial site offered by the city of Szolnok.

In 1894, the representatives of the city of Szolnok named a street after VERSEGHY Ferenc. The park by the river Tisza – where his statue stands – bears the name of the poet since 1990. Several plaques preserve the memory of the scientist throughout the city. In the 1960s and 1980s a cultural event was organized for the youth, called the Verseghy Students’ Days.

A local high school and the library were also named after VERSEGHY Ferenc. An NGO has also been involved since the 1920s in remembering the scholar-poet. Literary events, scientific conferences and linguistic contests honor the memory of Verseghy.